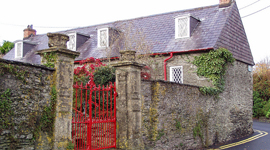 The Almshouses were built by Sir Robert Southwell (1635-1702). Sir Robert was born in the Kinsale area, and became one of the most famous and powerful men of his time. 1663 Elected to Parliament for the Cornish Borough of Penryn 1664 Appointed to Secretaryship of Prizes 1665 Married Elizabeth Dering. Buys one of the four Clerkships of the Privy council from Sir George Lane, Secretary to Ormond. Appointed Emissary to Portugal. Knighted later in the year. 1671 Sent to Brussels as Ambassador. Appointed Commissioner for the Excise 1672 Secretary to the Commission of Prizes, having previously relinquished the post in 1667. Acquired property in Spring Gardens, Westminster, and Kings Weston near Bristol. 1677 Succeeded to Vice-admiralty on the death of his father. 1680 Chosen for the embassy to the Elector of Brandenburg 1681 His place in the Excise Commission was terminated. 1682 Leased his little-used house in Kinsale as a Navy Office. 1685 Returned to Parliament again for the Cornish seat of Lostwithiel. 1702 Died 11 September at Kings Weston.

The Almshouses were restored in 1965-1970. They were built to accommodate eight aged destitute people of the town and they continue to this day to provide a service envisaged nearly four hundred years ago!

Church of St. John the Baptist
Ringfinnan 9/11 Garden of Remembrance