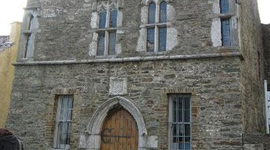 Built as an urban tower house by the Earl of Desmond c. 1500, Desmond Castle has served as Customs House, Prison, Ordnance store and a Workhouse. The Museum details the history of the Wine Geese; the intriguing story of Ireland’s wine links with Europe and the wider world. This is an essential half-hour all-weather activity. (Photo: John Collins.)

Desmond Castle was built in about 1500 by Maurice Bacach Fitzgerald, Earl of Desmond. It has had many uses. In 1600 and 1601 it was used as an arsenal by Don Juan Aguilla during the Spanish occupation of the town which lasted for 100 days prior to the Battle of Kinsale in 1601.

Kinsale was a designated Wine Port, and a supplier of ships for the Vintage Fleet as far back as 1412. In that year, the Vintage Fleet of some 160 vessels plying to and fro from Bordeaux included five Irish vessels, three of which were from Kinsale, and two from Dublin. More information on the wine trade can be found at https://www.highlandtitles.com/blog/guide-ireland-castles/#desmond. Desmond Castle was also used as a customs house.

In the 17th century the castle became popularly known as the “French prison” and was used for prisoners of war, most of whom were captured at sea. The majority of the prisoners were French, but many nationalities were ransomed or exchanged for their British counterparts. Some prisoners were housed in nearby huts, and the conditions were grim, with overcrowding, lack of food, starvation and disease. A disastrous fire in 1747 killed 54 prisoners.

During the American War of Independence, the crews of many American vessels were held prisoner in Kinsale in poor conditions. Help came from Rev. William Hazlett, a Presbyterian Minister in nearby Bandon, and from Reuben Harvey, a Quaker merchant in Cork. Through their influence conditions were improved. In 1783, George Washington thanked Harvey for “his exertions in relieving the distresses of such of our fellow citizens as were prisoners in Ireland”.

The “Wild Geese” was the name given to the thousands of families who migrated from Ireland from the 17th to the 19th centuries due to religious persecution, violation of treaties and prohibitive commercial legislation. Some of them entered the wine trade and are often referred to as the “Irish Wine Geese”. Their descendants can be found in the four corners of the world. Desmond Castle was restored by the Office of Public Works and now houses the International Museum of Wine which opened in 1997. The exhibition uses a variety of media to recall the castle’s eventful history and the amazing story of the Irish links to the wine trade which stretch back to Irish mythology and continue into the present day.

Desmond Castle & the International Museum of Wine (Closed for Renovations)