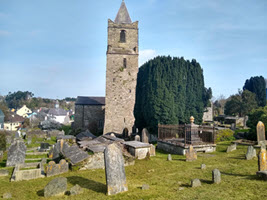 Built in 1190, this church has remained in continuous use to the present day. Some interesting features include an inscription in Norman French, the Easter sepulchre, the Baptismal font, the carved memorials, and the reredos from the Galway chapel as well as the wooden Coat of Arms. The Southwell Memorial in Carrera marble, is the work of Arnold Quellin of London. It was in this church that Prince Rupert proclaimed Charles II as King, after hearing the news that Cromwell had had King Charles I executed in London. Prince Rupert’s fleet was at anchor in Kinsale harbour at the time.

Inside there is a large flat stone carved with a round-handed figure was traditionally rubbed by fishermen’s wives to bring their husbands home safe from the sea. Several victims of the Lusitania sinking are buried in the graveyard.

Desmond Castle & the International Museum of Wine (Closed for Renovations)
Church of St. John the Baptist