By Darren Burke on November 17, 2014 in Things to Do, Walking, Running and Cycling

Garrettstown Wood is located on the edge of Ballinspittle Village, close to Kinsale in Co. Cork. Garrettstown or Baile Ghearoid was originally part of the Frank’s Estate. The wood covers an area of 200 hectares and is an extremely popular amenity. The main conifer species are; Sitka spruce and Norway spruce, European and Japanese Larch with a small sprinkling of Lawson Cypress sprinkled through. Broadleaves include ash, oak, elm, beech, lime and birch. Other flora common to the area are; hazel, alder, sally, furze, blackberry and a wide variety of wild plants. Fauna that you may come across are; fox, red squirrel, rabbit, hare, stoat and badger. The fertile mineral soil is derived from old red sandstone

The area is also steeped in history. The northern section of the wood is on elevated ground overlooking the Atlantic Ocean with views from the forest of the ocean site where the Lusitania sank on 7 May 1915. Also visible from the woods is the ancient fort of Ballycatten. This fort with its triple ramparts saw many a battle and it was at this ancient spot that the Vikings were first defeated in a pitch battle by the Munster men in AD 910. To the south one can see the Old Head of Kinsale and the fine sandy beaches close by at Garrettstown where many surfers enjoy the waves. To the west one may catch a glimpse of Courtmacsherry Bay and the wild beauty of the Seven Heads. On the southern end of the wood there is a spring well known as the ‘The Spa Bathing Bath’ or ‘Chalybeate Waters’. This bath, which was restored locally, has a bee hive stone roof to protect its waters from rain. These special waters were discovered in 1750 and many generations have been cured by bathing in them. At the most southern edge of the wood, there is the remains of an area known as the ‘Rabbit Warren’, a link to the woodlands estate days. Rabbit fur was used in the making of shoes and elegant gloves for ladies. Much of its stone walls remain. The remnants of an old deer wall are also to be found within the forest, this may be accessed off one of the waymarked trails.

There are two waymarked woodland trails to enjoy within this woodland. 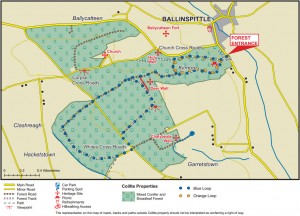