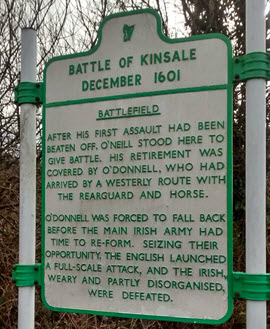 By Guest Contributor on February 12, 2015 in Historical Kinsale, Historical Sites

The first Barony of Kinsale was created in 1223, when Milo de Cogan gave a large tract of land (from the Bandon River to the sea) to his daughter as a dowry on her marriage to Myles De Courcey. Myles’ father was one of the early Norman adventures who came to Ireland.Back in 1601 Kinsale looked very different to how it looks today. In 1601, it was a small walled town of 200 houses. Pearse Street (or the Long Quay), the Glen and Market Street all formed part of the Inner Harbour and were covered in water.

BATTLE OF KINSALE 1601
In 1495 Henry VII extended English law over the entirety of Ireland, and assumed supremacy over the existing Irish parliament. Between 1495 and 1921, when a treaty between southern Ireland and Britain established the Irish Free State, there were many attempts made by the Irish to overthrow the British. One of the more significant attempts was the Battle of Kinsale.

As part of the European conflict raging between Catholic Spain and Protestant England, Spain sent a force (under the command of Don Juan d’Aquilla) of 3,000 men to Ireland to fight the England. The Spanish were supposed to land in the Northern part of Ireland; however they landed in Kinsale in October 1601. Here they soon took possession of the local strongholds, controlled by the English.

The English responded by sending at least 3,000 English troops under the command of Lord Mountjoy south from Dublin to Kinsale. They besieged the Spanish in Kinsale. The Irish armies in the Northern Province of Ulster under the command of O’Neill and O’Donnell thought that the Spanish could withstand a siege for some time – they had food, shelter, ammunition, and the necessary expertise. The conditions were probably worse for the besieging army, since they were exposed to the elements, and winter was coming. Therefore the decision was made that rather than immediately marching to Kinsale, with a guerrilla army untrained for either siege or open warfare, leaving Ulster at the mercy of the English and local Irish rivals, they would attack an English stronghold closer to the North. The hope was that this attack would draw at least some of Mountjoy’s forces away from the Spanish in Kinsale. O’Neill’s army broke through the ring of forts around Dublin (the Pale) with 4,000 men, and attacked the English. But, in spite of the pleas of the Palesmen, Mountjoy refused to budge from Kinsale, and eventually O’Neill and O’Donnell had to march their armies to Kinsale, across hundreds of miles of mud and bog in the middle of November 1601.

Before they left Spain, the Spanish had been led to believe they would receive massive and effective local support in Ireland. Yet nearly three months after they had landed they were still besieged in Kinsale. Isolated in a strange country, they had withstood every bombardment the English could throw at them. They had fought and many had died in skirmishes as they sailed forth again and again to attack the English guns or supplies,

On December 24, 1601 the battle was fought between approximately 5,000 Irish troops and 3,000 English. The battle itself took place about 4 miles north west of the town. The weapons used in the battle would have been swords, haliberds, firearms and pikes. The battle of Kinsale was over within a few hours with victory won by the English who claimed to have killed over 1,000 Irish and Spanish soldiers while suffering relatively few casualties themselves.

The besieged Spanish troops at Kinsale reached terms with Mountjoy nine days later and surrendered. They were given shipping and safe passages back to Spain. O’Neill and O’Donnell returned to the northern part of the country and submitted to Mountjoy in March 1603, from where they were to flee to the Continent in 1607. O’Neill was to die in Rome in 1616. The Flight of the Earls (O’Neill and O’Donnell) signalled the end of the old Gaelic in Ireland.

The battle was a clash of more than two military forces. It represented a meeting of two cultures the old Gaelic world and the powerful English way of life.
Peter Barry
(a man for all seasons) 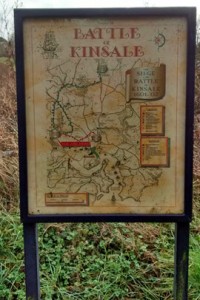 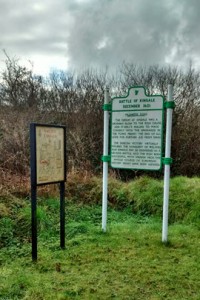 Outstanding Talk Given in Kinsale by Dr. Fergus Heffernan
The Stone of Destiny (2001)