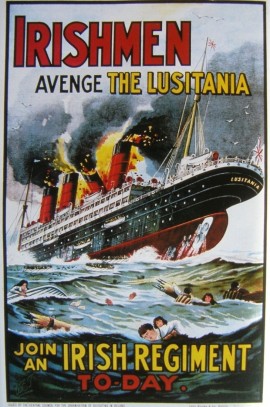 By Dermot Ryan on February 21, 2015 in Historical Kinsale, Historical Sites

The sinking of the Lusitania off the Old Head of Kinsale on May 7th 1915, has been described as the first major civilian atrocity of W.W.W.1 and part of the reason why President Wilson eventually abandoned the U.S. policy of neutrality in April 1917. At the beginning of the war the so-called Cruiser Rules, had meant that crews were allowed abandon ship before they were sank as a result of an attack by enemy ships or submarines. As a result of the change in British policy, instigated by Winston Churchill, which was to advise ships to ram submarines and even engage in gunfire. The German policy of warning shipping also changed and casualty rates increased.

The Lusitania sailed from Pier 54 in New York in May 1st with almost 2,000 passengers and crew. The passengers included the playboy millionaire, Alfred Gwynne Vanderbilt, playwright, Charles Frohman and art collector, Sir Hugh Lane. The cargo was listed as mixed but this manifest became a matter of dispute later when the propaganda war began on the nature of the cargo and the justification for the attack. The voyage under Captain William Turner was uneventful and the first class passengers were enjoying lunch to the strains of the Blue Danube when disaster struck. The ship had turned in the direction of Cobh ( then Queenstown ) and some claim it had received orders to do so as it was known there was a submarine in the area which had just sunk the schooner, Earl of Lothian. However, at 2 p.m. Captain Schwieger in the u-20 was lining up the Lusitania for a single shot, his final attack on shipping before returning to Germany. 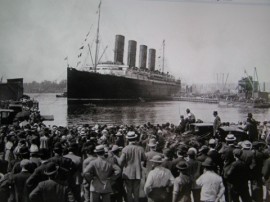 The torpedo struck at a point 20 to 40 feet forward of the bridge, alongside one of the cargo holds but there was a second huge explosion and the ship was gone in just 18 minutes. 1198 people, plus three stowaways died. A higher percentage than on the Titanic. Many suffered injuries caused by falling lifeboats and debris as the ship developed a steep list and sank quickly as a result of that second explosion. Only 6 of the 40 lifeboats could be launched successfully and fishing boats were first to the rescue, including some based in Kinsale, such as the Daniel O’Connell and the Wanderer from Peel, but they were forced by British commanders to transfer the dead and the survivors to naval boats so that they could be landed in Cobh ( then the Royal Navy headquarters. ). The delay in going to Cobh rather than Kinsale was later claimed to have caused unnecessary deaths. 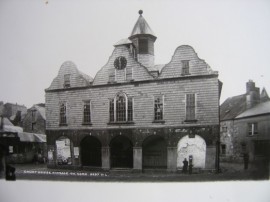 The inquest, held in the Kinsale Courthouse / Town Hall, now the Museum, was conducted by solicitor, John Horgan with a jury of 14 Kinsale men. It returned a verdict of “wilful murder” against the Kaiser and the German forces much to the surprise of the British authorities who feared that such a well- known supporter of Redmond would return an anti-British verdict. That verdict was used to whip up anti-German feeling in Ireland and the U.S. as well as in Britain, and there was rioting in Liverpool and Boston. The subsequent media propaganda war was won by the British. One attempt by the German artist, Karl Goetz, who designed a Medallion to portray the sinking as the result of the importing of war supplies, was turned into a successful black propaganda anti-German campaign funded by Selfridges. 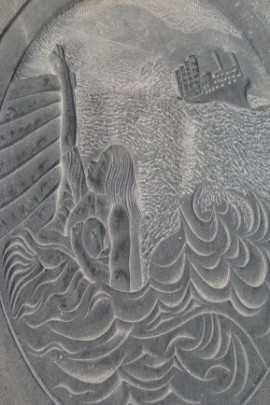 In an apparent attempt to divert attention from claims that the second explosion could have been caused by a cargo of munitions, the official Mersey inquiry claimed that the second explosion had been caused by another torpedo. Witnesses were hand picked and evidence screened to ensure that the verdict placed all the blame on the U-20 and the German authorities. There was also a campaign, orchestrated by Churchill, to blame Captain Turner for the loss of the Lusitania. After the war was over, the new German government agreed to pay compensation while Cunard escaped any penalty as the findings of the Mersey inquiry were also applied to claims made in the U.S. courts. Media was almost unanimous in the condemnation, mainly in the press coverage while the first cartoon film, the Sinking of the Lusitania by Windsor McKay, was made to expose the German ” atrocity ” Thousands of young Americans volunteered to fight in Euorpe while launched a recruiting campaign based on the slogan, “Avenge the Lusitania “ 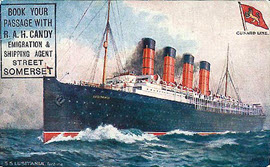 The debate on the circumstance surrounding the sinking of the Lusitania and the exact nature of the cargo has continued to be of interest, especially in recent years. Conspiracy stories abound, ranging from the nature of the cargo to the hidden agenda of politicians and their advisors in Britain and the U.S. The earliest expedition planned to explore the wreck was in 1935, but this was abandoned and it was not until 1962 that the first series of dives by John Light, took place. These did not produce conclusive evidence and Robert Ballard, who had earlier located the Titanic, concluded in 1993, without any direct evidence, that the mysterious second explosion could have been caused by coal dust or an exploding boiler.

Research by Colin Simpson in the 1960 /70’s gave details of the cargo showing 4.2 million .303 bullets, quantities of shrapnel, gun cotton and aluminum powder which some claim the latter could have been the cause of that second mysterious explosion. Unfortunately, the owner of the Lusitania, Greg Bemis, whose life ambition is to discover the cause of the second explosion and the exact nature of the cargo has seen his efforts to explore the wreck constrained by the Irish authorities, but it is essential that his research be allowed continue so that the real story of the Lusitania can be revealed. 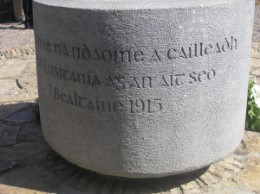 During your time in Kinsale visit the Museum, the location for the 1915 Inquest, the graves in Saint Multose Churchyard and the memorial and the Lusitania centre in the Signal Tower at the Old head. 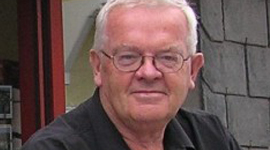 Hands on Steak and 3 sauces Class with Kinsale Gourmet Academy