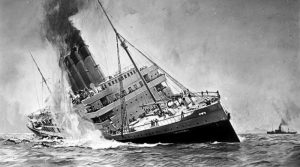 By Jackie Dawson on March 25, 2015 in Featured News, News
The Lusitania centenary is to be marked by commemorative events in Kinsale, The Old Head, Cobh and Courtmacsherry, Cork.
During the first week of May, four coastal communities in Co. Cork are coming together to host a series of commemorative events, entitled Lusitania100 Cork, to mark the centenary of the sinking of the RMS Lusitania by a German U-boat off the coast of Cork, Ireland, during the First World War. The Lusitania was en route to Liverpool from New York and 1,201 people lost their lives in the tragedy.
Kinsale, The Old Head, Cobh and Courtmacsherry in Co. Cork, in association with Cork County Council, will pay tribute to all those who lost their lives in 1915 and remember the gallant efforts of their ancestors who responded with great courage and compassion to rescue survivors, the bereaved, and recover the dead, in ordinary fishing boats and lifeboats. These communities witnessed first-hand the trauma and heartbreak of the disaster.
The Old Head of Kinsale is the point from which the Lusitania took her final bearing on 7th May 1915 and is the most prominent accessible point of land to the ship’s final resting place, which is just over eleven miles due south of the Old Head Lighthouse.
The old British Royal Navy Watch Tower of the Seven Heads peninsula in Courtmacsherry Bay is the closest point of land to the Lusitania wreck, and also home to the oldest RNLI Lifeboat Station in Ireland, which was instrumental in the aftermath of the disaster.
The mass grave at the Old Church Graveyard on the Great Island of Cobh was the final resting place of the dead, and to this day there are remains that have never been named or claimed.
The commemorations for Lusitania100 Cork are vast and will include Wreath Laying Ceremonies with President Michael D. Higgins in Cobh, and Minister Simon Coveney at the Lusitania Monument on the Old Head, both at 2.10 pm on May 7th, the time the tragedy happened.  Members of the public are welcome and are requested to be at the venue by 1.45pm sharp.
A number of re-enactments of the tragedy will also take place. Courtmacsherry will recreate the call to service of the RNLI lifeboat, while Cobh will remember their rescue efforts with a twilight Flotilla of work boats, fishing boats and pleasure craft, each illuminated with white lights. Cobh will also re-enact the Mass Funeral procession, and Kinsale town is recreating the aftermath Inquest with descendants of the 1915 Jury.
The Old Head Signal Tower (and the associated Flag- and –Ball signalling system), is being restored and transformed into a Lusitania Museum, with plans to exhibit artefacts recovered from the wreck. This will be officially opened on May 7th. Eventually the Museum will also host an iconic piece of sculpture with the names of all who sailed on the Lusitania on May 7th 1915. A new Lusitania Exhibition will also open at the Queenstown Story at Cobh Heritage Centre from March 25th.
In addition, all four communities will host Lusitania related lectures, talks, photographic exhibitions, memorabilia and street fairs, and centenary commemoration dinners. A free open air tribute concert encompassing music from Cork’s Harbour will also take place on Cobh’s Promenade on May 7th, a perfect vantage point to view the twilight Flotilla.
Kinsale History Society and Port of Cork have both launched schools initiatives, encouraging primary and secondary students to study Lusitania and submit Lusitania projects, essays and art for display at the Temperence Hall in Kinsale town Centre and Cobh Maritime Building over the commemoration week.
For more information on Lusitania100 Cork see
www.visitcorkcounty.com/Lusitania100Cork, @LusitaniaCork on Twitter, or @Lusitania100Cork on Facebook.
Local websites include:
www.lusitaniakinsale.com
www.historicstrollkinsale.com
www.oldheadofkinsale.com
and here on www.kinsale.ie we will update our events calendar and continue to bring news of local activities. 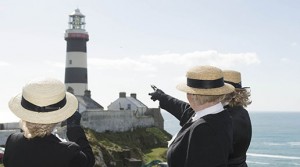