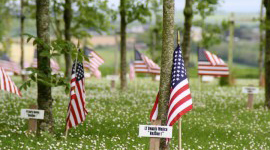 This Saturday 18th April, Kinsale will host a special day to unveil a plaque in memory of US Navy SEAL Lt. Michael P. Murphy who was killed in action in Afghanistan in June 2005. The recent blockbuster film “Lone Survivor” is the story of his last mission.

There is a full programme of events in Kinsale, starting at The White House at 1pm, with an unveiling of a plaque by Lt Murphy’s parents Dan and Maureen Murphy, his brother John and other family members, as guests of honour.

This will be followed by the laying of a wreath at the 9/11 Rememberance Garden in Ringfinan, followed by a fundraising dinner at The Trident Hotel at 6.30pm. Contact  [email protected] or call (087) 9387303 if you wish to attend this special event.

Michael’s family have strong connections to Ireland, and to County Cork in particular. They have been hugely supportive of this project, to pay tribute to an Irish-American warrior and his fallen comrades.

The US Ambassador His Excellency Kevin O’Malley, along with the US Defense Attache Lt Col Sean Cosden, will represent the US Government. Also joining the Irish Veterans will be a detachment of crew from the Warship USS Michael Murphy, Senior Ranking US Navy officers, and a number of US Navy SEALS, Michael’s brothers-in-arms. The Irish Naval Service will have a representative detachment.

Additional Information and Membership information is available at: www.irishveterans.org 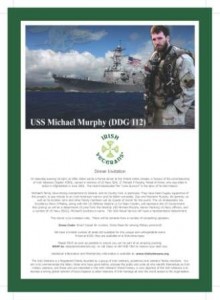