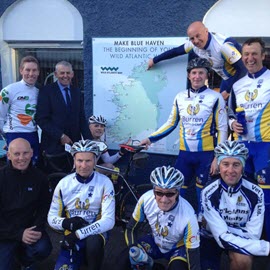 On Thursday 30th April at 7am, over 20 cyclists from The Burren Cycling Club will set off on their journey, cycling the Wild Atlantic Way, from Kinsale to Inishowen and on to Derry City. According to club PRO, John McDonnell, they will cycle in relay groups, covering over 120km each day, cycling 2350km in 5 days. The main organiser is Patrick O’Donoghue of Burren Cycling Club.

The cyclists were welcomed to Kinsale by Cllr Kevin Murphy, Chair of Bandon & Kinsale District Council, who wished them well on their journey as they head from The Blue Haven Hotel, Kinsale through Cork and Kerry to Tralee on Thursday. The club will cycle on to Ballyvaughan and Galway on Friday, Ballina on Saturday, Buncrana on Sunday arriving at the Inishowen peninsula, before being met by Elisha McAllion, Chair of Derry City and Strabane District Council. 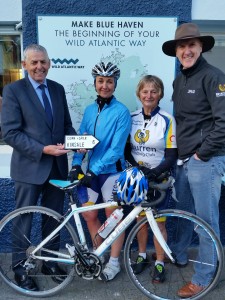 Cllr Kevin Murphy welcomes Karen Quinn, Cathleen O’Loughlin and John McDonnell of The Burren Cycling Club to Kinsale before they set off on their 5 day relay cycle of the Wild Atlantic Way. 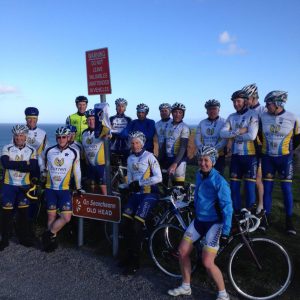