Kinsale History Society will host a wreath laying ceremony at the bust of the McCarthy brothers  on the Pier Road, Kinsale,  on Thursday 16th March 2017 at 6pm to Mark the 100th anniversary of the death of Antarctic hero, Timothy McCarthy. Everyone is welcome to attend, in advance of the St. Patrick’s Maritime Festival and Fireworks at 7.30pm on the Pier Road.

Born in Kinsale (Lower Cove) on July 15th 1888, like many of McCarthy’s generation, Timothy McCarthy served   his seaman’s  apprenticeship in the Royal Navy, before reverting to civilian  life in 1905.

In 1913 he applied to take part in the Endurance Trans Antarctic Expedition under the stewardship of veteran polar explorer Ernest Shackleton.

His application was accepted, possibly as a result of the exploits of his older brother, Mortimer, who had already earned a silver antarctic medal  and had a mountain named after him – as a result of his actions, with Captain Falcon Scott, in an earlier expedition in 1910. 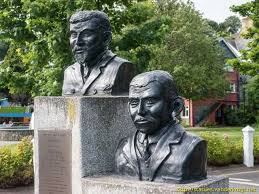 The faith of the Endurance crew is now somewhat legendary, when the men were forced to abandon the ship, after it became trapped in the region’s infamous pack ice, eventually leading to the ship disappearing beneath the depths of the cold Antarctic’s waters.

With little chance of rescue, Shackleton led his men across the  treacherous pack ice and open sea, reaching the relative safety of Elephant Island, before setting out with his most experienced sailors – including Tom Crean and Timothy McCarthy – in the James Caird, a small open boat, to raise the alarm at the whaling station at South Georgia, almost 500 nautical miles away. 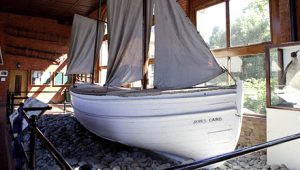 Miraculous with the skill of the boat’s navigator, Frank Worsley and the  seamanship of Timothy McCarthy, whose outstanding helmsmanship guided the boat through the worst of the South Atlantic’s storms, Shackleton made landfall at South Georgia and eventually rescued the remaining crew on Elephant Island.

Returning to Britain, McCarthy reenlisted in the Royal Navy, he lost his life on the 16th March 1917, when the oil tanker, the Narragansett,  he was serving on was torpedoed by a Germany submarine.

His brother, Mortimer, collected Timothy’s silver polar medal, which was awarded posthumously in 1920. The medal was sold to a private collector at auction last year in London for £65,000. 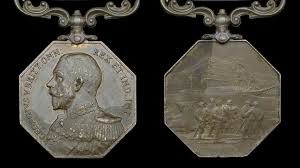