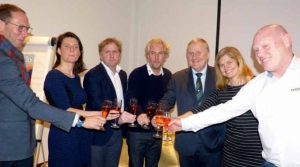 By Helen Kelleher on February 11, 2019 in Featured News, News

Hugely exciting news this week with the announcement that Kinsale will host the 50th Figaro Race which runs from June 6th to 9th. Two Irish skippers Joan Mulloy (Westport) and Tom Dolan (Mullingar) will compete in this international event which for the first time this year features a new foiler one-design boat called the Figaro Beneteau 3.  It is a hugely exciting and prestigious event which will bring great excitement and business to Kinsale.

Ciaran Fitzgerald, Kinsale Chamber and Managing Director of The Blue Haven Collection said: “We are delighted. It will be a major boost for Kinsale, Cork and Seafest. We are delighted that we have won the opportunity to host this eagerly anticipated event especially now in its 50th year of Le Figaro. I remember it as a child, sailing my Mirror when these amazing Figaro sailors arrived”.

The Figaro has been described as the ‘Tour de France’ on the ocean. It will be organised by a locally based voluntary committee, chaired by Tony Small assisted by EnCircle Na Farraige, an event management company. It will also be supported by the Atlantic Youth Trust, whose mission is to connect youth with the ocean and adventure with a schools youth activation programme promoting the Figaro, Seafest and the maritime.

Spread over a month, The Figaro route is tough. The first leg is 550 miles from Nantes and around the Fastnet Rock to Kinsale. From here a short prologue to Cork Harbour and then its 615 miles around the Isle of man Roscoff. From there its a 450 mile Channel course around the Scilly Isles and Jersey back to Roscoff and then a final 450-mile leg to Dieppe for a Grand Finale.

In the build-up to the event, it is hoped that Schools Programme around Cork and Munster will visit schools to promote the event, backed with a social media campaign, print and digital activation. This would be co-ordinated through the Atlantic Youth Trust Charity. Also it is hoped to bring maritime interests together and the backing of the Department of Marine, Cork City Council Seafest organisers and Irish sailing and adventure sport tourism interests.

A major on-the-water spectacle is planned for Cork Harbour and Kinsale on Sunday, June 9th. The Figaro Fleet is expected to depart Kinsale in a Prologue Race to Cork Harbour. Each professional Figaro Skipper would have a group of selected youths from the Schools Programme for the opportunity of a lifetime. Then in Cork Harbour the youths would be taken off by rib and the major race would start with a plan to mobilise on the water every boat and it is hoped one of the Irish TV channels will televise it live.

Kinsale welcomes the event with open arms. The first boats to finish in Kinsale are expected sometime late on Wednesday, June 5th. The skippers will relax and recover from the 600-mile leg from Nantes in France before making final arrangement for the start of Leg 2 from Kinsale to Roscoff in Northern France, which will take place on Sunday, June 9th. Each skipper is supported by shore crew including technicians and press officers at each stopover, and when added to the race organisation staff the travelling caravan consists of more than 250 people. The pontoons where the fleet will be moored will be open to the public and the prizegiving ceremonies will take place at Market Place in Kinsale and in similar fashion a major spectacle will also take place at Cork Harbour for the Sunday Race.

Further information can be obtained from Donal Small on [email protected]