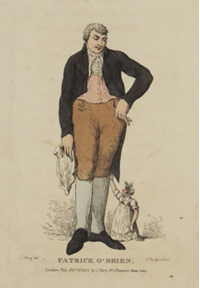 Made to Measure Films, Kinsale are delighted to announce that they have received funding through Creative Ireland to produce a short film about the life and times of our very own homegrown Giant – Patrick Cotter.

The film will act as an introduction for local residents and tourists to Kinsale to one of the most remarkable, but little known stories, of a son of the area who triumphed over adversity and prejudice to become: “The Irish Giant, perhaps the most famous Giant who ever lived’’ The Gentleman’s Press 1806.

There has been significant interest in this project since he represents the exciting and colourful local heritage and culture of the 18th century Kinsale District.

Filming is proposed to take place in the Kinsale town over the summer and will be of huge interest to businesses and the public alike. It is also proposed that the film will run as a video installation in the Kinsale Regional Museum, and made available to all the Irish International Tourist websites.

Made to Measure Films are looking for sponsors/crowd funding to increase the budget on this project. Since this is a piece about heritage of such an important town it would be an opportunity for businesses to align themselves with a video that will have an indefinite and global audience.

All sponsors will be acknowledged at the end of the film for their contribution.

Made to Measure Films Ireland Ltd