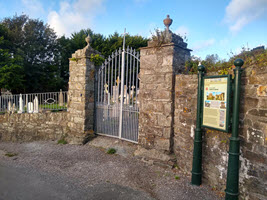 By Darren Burke on September 20, 2019 in Historical Kinsale, Historical Sites, Things to Do

In 1334 Robert Fitzrichard Balrain built St. Mary’s Abbey and bestowed it upon Carmelite hermits whom he had become acquainted with after they fled Mt. Carmel during the Saracen persecution in the Holy Land. He added 29 acres in the Liberties that was a tract of land a kilometre wide circling the Town Wall. The land was to be parcelled out among the local people and administered by the hermits. The early hermits were closely associated with the local leprosia, with administration, and with the granting of Charters to Kinsale. The hermits gained their water supply from a well called ‘Fan na Tubraide’ resting over the top right hand wall. It is reputed to have given Kinsale its name. In 1541 Henry VIII totally suppressed the Abbey which consisted of church, belfry, hall, other houses, and a cemetery In 1641, English forces bombarded the Abbey..during a December celebration of Mass, killing celebrants, friars and congregation. Their mortal remains were buried beneath the rubble.