The sell out 40th Kinsale Gourmet Festival marks a major anniversary of this ever-popular event, and will be celebrated in high style from 7th-9th October 2016. The Festival is hosted by Kinsale’s ten Good Food Circle restaurants, and promises a weekend of fine food and wine in a fun atmosphere.

The festival will be opened by Brian Cronin, founding member of the Good Food Circle, who with his wife, Ann, established the original Blue Haven Restaurant. He will be flying in from Spain as a guest of the event that will host many well-known personalities with close links to the Festival down the years, and several former restaurateurs.

The Festival kicks off in style with a Laurent Perrier champagne reception at 6.30pm on Friday 7th October 2016, followed by a celebratory five-course Taste of West Cork Black-tie Dinner at Actons Hotel. 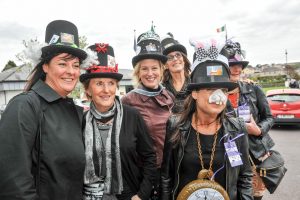 The Festival concludes on Sunday with the four course Fruits de Mer Spectacular at Actons Hotel, followed by a charity auction to benefit local charities. See www.kinsalerestaurants.com for participating restaurants and further information.