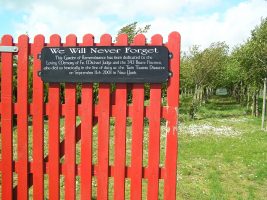 There is a special ceremony which takes place in Kinsale on September 11th every year, at the Garden of Remembrance to mark the deaths of the 343 New York firemen. This year there will be an extra ceremony on American Independence Day, Saturday 4th July at 6 p.m. This is the result of requests from visitors that those who died later as a result of the explosions be remembered and it is also to give local residents an opportunity to mark the deaths of so many because of the COVED-19 virus in the U.S. and in Ireland.  The ceremony will be short with prayers by Rev Peter Rutherford and Rev Stan Hessian the laying of a wreath and a minutes silence in memory of the dead. Participants are asked to maintain the appropriate social distancing.

The Garden of Remembrance was established by a Kinsale lady, Kathleen Cait Murphy who worked as a nurse for over 30 years in New York City. During that time she came to admire the work of the fireman and was shocked at the deaths of  343 of their number who died in 9/11. As a result, she decided to provide a memorial in Ireland, on her land at
Ringfinnan, Kinsale, with a tree for each of the firemen who died as well as one for their chaplain Father Michael Judge who was a personal friend of hers. Since the garden was planted many relatives and friends of the dead have come to visit and leave prayers, photographs and flowers there. The 10th anniversary of the Twin Towers disaster was recalled on Saturday, 10th September 2011, by civil and religious ceremonies with representatives from the Irish Government as well as the town and county authorities attending a mass in memory of 9/11. Unfortunately, Kathleen was not there as she died in March but family and friends honoured her work with a tree-planting ceremony to recall the life of the lady who has helped preserve the story of these New York firemen who died so tragically.

Anyone looking for further information should contact Virgil Horgan at 4772557 or Dermot Ryan, 0868267656 or look at kinsaleheritage.com.